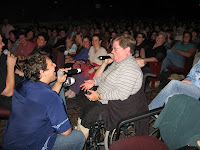 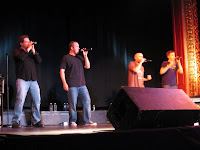 Last night I attended an a cappella rock concert by the group Five O’Clock Shadow at TCAN in Natick. A rip-roaring time was had by all.

I’ve been a fan since I first heard and saw them perform around 1995. They weren’t quite so much rock as folk back then; only one of those group members is still part of the “band” – Dan.

The style of music may have changed, but the energy has not. Paul, Oren, Caleb, Dan, and the infamous “Stack” (David Stackhouse), will keep your toes tapping, hands clapping, and fingers snapping – literally – throughout the show.

They perform covers as well as original music and the only instruments they use are their vocal cords. Stack is mostly the “percussion” guy wearing a throat mike as well as a second one at his mouth; his antics should not be missed. All 5 of them have great singing voices, each with his own style.

I hope you have a chance to hear and see them perform, but at the very least check out their myspace page or web site for a taste of the fun.

Above video from a reunion concert last year, also at TCAN.
Peace, Judi

COOL! Is that from this show with the guys singing to Eileen? She looks giddy like a school girl :) Sounds like you ladies had a blast as always!

We are back but I am slammed with work now from two weeks off-ish...will catch up soon though :)