I hope you are not tired of reading about and seeing photos of my family this month; this should be last for a while. 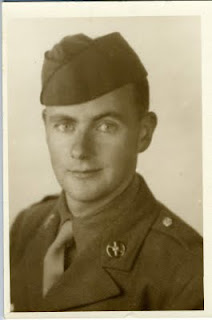 He didn't serve in the army until WWII. He had previously been rejected because he had flat feet, but during the war they were taking everyone; he did clerical work in Texas. Didn't he look handsome in his uniform? 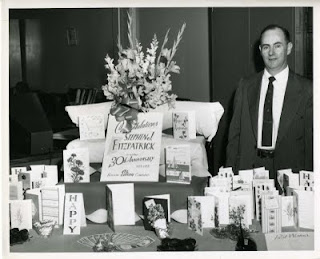 Dad worked for the Boston Edison for something like 43 years - here he is on his 30th anniversary. 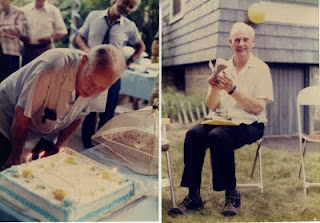 Here he is on his 8oth birthday at the surprise party we threw in his backyard. 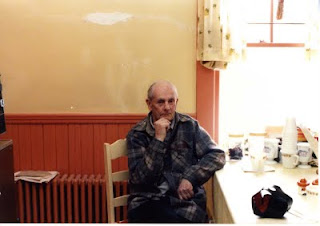 And this is in 1987, sitting in his kitchen.
Just as with Mum( Ruthie) and Ed, he is sorely missed. They just don't make people like this anymore.
Peace, Judi

That was beautiful. My Dad passed away in 1982 and I still miss him too.

Judi, your father was a very handsome man. Thank you for sharing.

Julie, there's just something about fathers and daughters.
Marlene, thanks for saying so, he certainly was an attractive man.

beautiful and sweet tribute judi.
your dad was a handsome guy for sure! :)

Sweet, I loved reading this and seeing how handsome (and totally loved) he was!

I just adore these photos, Judi! What a lovely post and an even lovelier family :-)

Oh your dad certainly did look very handsome in his uniform! This is a beautiful and very touching tribute to your dad. I really enjoyed it :)

Gramp was so quiet by the time we came along but in between the naps...er, um, I mean...resting of his eyes, a big smile would sneak out all the time, he was just a very happy person as I remember him. Such a wonderful guy, this is great. He was quite a hottie as a military man, go Gramp!