I've been uninspired of late, but had a flash of something I wanted to try while showering yesterday.

Below you'll see the before image which was taken in 2009 from a second floor window in my Massachusetts home.  I removed the view, played with the curtains, and added a new view which is what could be seen from my enclosed patio when I lived on the northwest side of Tucson.

The before is called "The View at Dusk"; the after is titled "The View From Jail" - due to how I sometimes felt when sitting inside that enclosed patio.

What do you think? 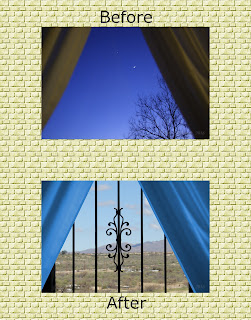 While showing these images at a digital art group meeting last night, our fearless leader suggested doing a series; another member suggested making a book of the series - watch this space, both things may soon happen.  Already have a couple of new "views" in mind.

Peace for all, Judi