Can't believe I never posted this last week, better late than never.
Louisville Impressions Part 11 (April 27, 2008)
Sunday – another nice day weather-wise, although much cooler than it was Friday. The morning flew by working in Photoshop trying to figure out why a generated web gallery wouldn’t allow me to enter in the title and was taking the default of the last gallery I generated. May have to borrow daughter number one’s PS text book next time I am home – never did figure it out. Gave up and instead updated it in Dreamweaver.

Spoke with EV on the phone and got caught up on what’s new with her, then went out walking. Last time I saw this “horse and jockey” they were not so decorated, guess they are ready for next week’s derby already. 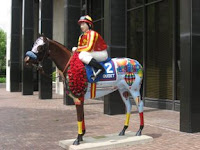 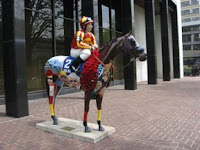 Had lunch at this Mexican restaurant, reminded me a lot of José’s in Cambridge. 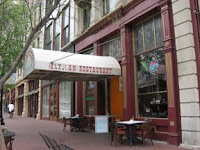 Finally, visited Frazer International History Museum. I never expected 3 floors of exhibits almost all about war and arms and armour (British spelling) – very distressing. There was an interesting film about how chain mail was probably made showing the technique someone is using now to duplicate it; I guess this appealed to the crafter in me. Here’s an example of some from ancient times. 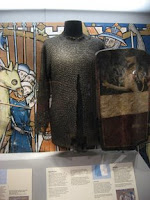 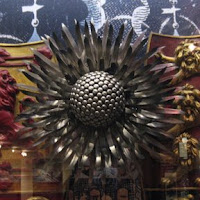 The other crafty item in this medieval section was this sunflower made from the points of out of service swords – recycling at it’s decorative best.

Equally upsetting as all the weapons was the exhibit about the wreckage of the Henrietta Marie that sunk in the Caribbean during it’s second return voyage in 1700. When it was explored 250 years later, shackles were found and it was finally determined that it had been a slave ship. Some of these shackles were child-size! How could people have done this to each other? Unless something new and wonderful is being exhibited there I won’t be returning anytime soon. 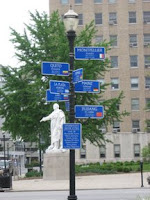 By the time I headed back to the apartment it was getting windy and cooler. Found this along the way. Reminds me of the sign in Maine that points to Norway, Paris, etc.

Sure hope the warm weather will return again soon.
Peace to all, Judi
Posted by Judi FitzPatrick on May 03, 2008

Can you imagine anyone in this day and age having the patience to sit and link all those rings into a chainmail shirt? Fascinating stuff! The exhibit sounds creepy & kind of sad to me too but anything is worth seeing once & look you got a great blog out of it! Hope the upswing of tourists create a much needed boost in the economy there! How was the food?