It was so windy last night, the Balloon Glow was cancelled. This morning it was still windy and wet, so the balloon race has been postponed; they’ll try again this evening.

There’s a marathon/mini-marthon going on this morning. Check out the site for the event here: http://derbyfestivalmarathon.com/
7:25 AM – Derby Festival Marathon Wheelchair Division begins. Looks like there were 8-10 entered in this division.

7:30 AM – Derby Festival Marathon Runners Division begins. TV announcers are saying there are 12,000 entrants. There are 4 runners who’ve been in it 35 times – since the first one in 1974. One of these entrants is 73 years old.

Think I’ll go try to see some of it, more later!

Continued:
I walked south to Breckenridge, got to see some of the early, low number runners – even got this shot of the man wearing #1. Not many people were out watching, but it was only 08:30 and cold and damp. After cheering some of them on, I stopped for breakfast, then did my grocery shopping at Kroger. 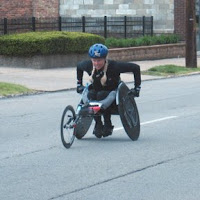 After putting the groceries away, I went out again and headed north to Chestnut St. Here the runners of the full marathon were on their way to the finish line. I followed along the route until I got to the end on Market St. 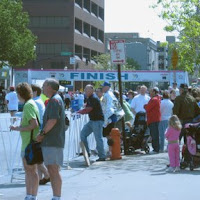 Coming from Boston, and fighting hoards of people to be near the finish line on Boylston St., it amazed me that so few people turned out here to watch. There were empty seats in the bleachers and open spots along the rail. Maybe it was more crowded earlier when the first runners were arriving, but it sure wasn’t evident by the time I got there.

It was fun to be so close and cheer people on; couldn’t be a better time to be in Louisville!

Until next time, peace to all, Judi
Posted by Judi FitzPatrick on April 26, 2008

I think you really missed your calling on the photography front...you have taken some of the best action shots I've ever seen! this is the second of your photos that has had a perfect crispness while the person is in mid air (Sean, #1 runner) and the wheelchair racer shows so much emotion. Don't get me wrong, I love your flowers & detail photos but I really think you should do more of this type of work because you have a natural knack!

This year (as all Patriot's Days in MA) there was the marathon and a sox game that started at 11AM. Approximately 37,000 people were flooding onto the finish line at the same time. Mass hysteria. Pun intended.

thanks for the recap, sounds like a really fun day :~)